Foiling is more fun when you’re not bleeding. So we considered every component and how it’s user friendliness could be improved.

/ All wingtips have rounded tips and are curved down, away from kicking feet.
/ Wing covers are designed to stay on during setup, minimizing accidents while on land.
/ 90cm mast gives enough height for correct technique, minimizing both touchdowns and breaches. / Rigid aluminium hardware delivers consistent, reliable lift which increases control.

Rigging up has never been the most fun part of windsurfing. Adding a foil can increase the complexity, so we have focused on making it as easy as possible.

/ Minimal bolts mean less to install.
/ Only 2 different bolt types – short bolts for the wings, and long ones for the mast.
/ A single tool required. The 5mm Hex Key was selected for it’s long-term reliability, the abundance of compatible tools (many sails use this size for batten tension), and easy replacement of bolts.
/ Plug in connections between fuselage/mast and fuselage/front wing.

If you’re flying half a metre out of the water, you don’t want that front wing moving around underneath you. Rigidity is the key to holding the wings in a consistent position. Rigidity allows you to lock in and windsurf on the foil, rather than riding a bucking bronco. 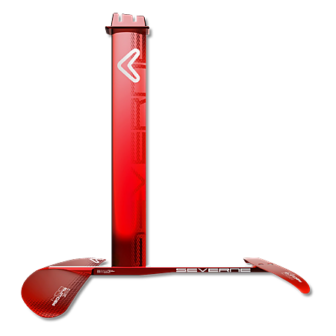